For prices see below
To order this package click here: How to contact us / How to order

For other CD-ROM titles consult our Catalogue

Wenlin is our best-selling package for learners of Chinese. Wenlin tackles the most frustrating obstacles for students, teachers and scholars of Chinese with its versatile and easy-to-use interface. An integrated solution, Wenlin combines a large, fast Chinese dictionary, a full-featured text editor, and a unique "flashcard" system in one intuitive environment. Click here for further information: Wenlin 4.0.

Version 4.0 is the latest version. It is available via download from the Wenlin website at http://www.wenlin.com. Camsoft is the official UK agent for Wenlin and handles invoicing and payments. If you decide to buy a copy of Wenlin we will supply you with a unique reference number so that you can download the software from the Wenlin website. 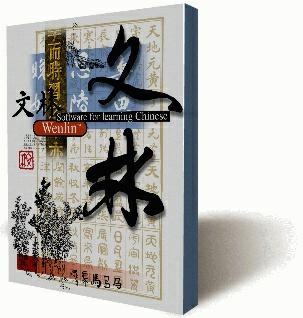 Powerful Dictionary Interface: Wenlin have added a bigger and better Chinese-English dictionary with close to 200,000 entries and many other improvements to the definitions, such as measure words for nouns. The famous Sinologist John DeFrancis is the editor of this greatly revised and expanded edition of his original ABC Dictionary.

Instant Look-Up: Wenlin’s "instant look-up" gives you the ability to look up any word or character in any Chinese electronic text simply by pointing to it. You can look up words and characters by pronunciation (pinyin), by handwriting recognition, by stroke count, and by components (or radicals). You can modify dictionary entries and add new ones. New commands in the List menu enable looking up characters using the traditional 214 radicals, which you can see listed either in their traditional order or in a new order that takes into account variant and simplified forms and modern classifications of stroke types and stroke counts. Under each radical you can see its list of characters, ordered by residual stroke count.

Detailed Information: Click on a character or select a compound word for detailed vocabulary information. Extensively cross-referenced character descriptions include pictures of ancient, modern, simple and full form characters. Each character entry is linked to listings of all the compound words that contain the character, including definitions, ordered by frequency of usage. Lists of characters by stroke-count and by pronunciation, and groups of characters that share components, are also instantly accessible.

Chinese Text Editor: Wenlin is an essential desktop resource that gives you access to important Chinese scholarship, literature, and news. Wenlin lets you read, write, edit, and print Chinese documents of any size. It sup-ports

Wenlin's full-featured text editor allows you to copy and paste between applications and is compatible with other Chinese language software and tablet hardware. Improved printing feature lets you specify the sizes of the margins (left/right/top/bottom), in either inches or centimetres, optionally have page breaks shown on the screen, and optionally have page numbers printed at the bottom of each page.

New Font Support: The built-in Chinese font is in the classical Song dynasty style and is scalable to look good even on high-resolution printers. Support is also provided for external Unicode TrueType fonts, for Chinese, English, and pinyin.

Character Input: Characters can be entered using pinyin or handwriting recognition. Simple and full form Chinese characters, pinyin, and English can even be combined in one document. Redesigned handwriting recognition box lets you customize its behaviour. Options include ignore stroke-order, and or present a choice between all the characters that are most similar to the one you have written.

Learning Tools: Use the "hand" tool for looking up vocabulary, the "I-beam" for selecting text, and the "grabber" for quickly copying text. The "brush" tool, for handwriting recognition, makes practicing and identifying characters much easier. Improved stroking box displays characters stroke-by-stroke in the beautiful Song dynasty style, appears in its own window with improved arrangement of controls, enables choosing foreground and background colors and even independently adjusting the horizontal and vertical thickness of strokes. The "mouth" tool lets you hear a high-quality studio recording of the Mandarin pronunciation of any character, in a man and a woman’s voice.

Dictionary Switching: Wenlin lets you switch back and forth easily between two or more dictionaries. It also enables extracting modified entries from one dictionary and importing them into another.

By pointing at any Chinese word on the screen, you can see the definition in English. In this illustration, the student is pointing at the first character in the two-character Chinese phrase meaning 'once upon a time'. (Notice the mouse pointer , which looks like a pointing hand; and the English definition, which appears on the bottom line.) If you were using Wenlin right now (instead of just looking at a picture of Wenlin), you could point to any of the Chinese words and see its English definition just as easily. This works with practically any Chinese text which you could find anywhere in electronic form (including Chinese texts which you can download from the Internet). By clicking on a word (rather than just pointing to it), you can easily access more detailed information. 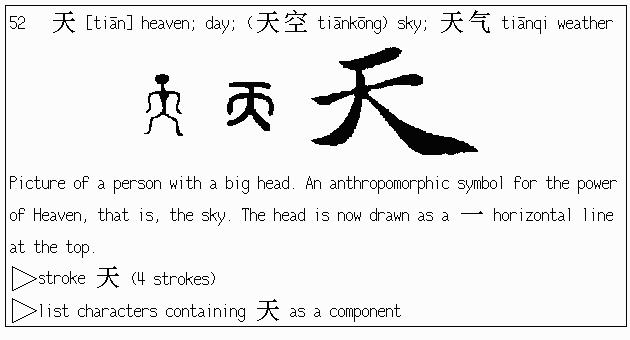 Wenlin's electronic dictionary includes pictures of ancient and modern forms of Chinese characters, along with explanations, to help you understand and remember the shapes of Chinese characters. Here we see that the Chinese character for 'day' is also the character for 'heaven' and 'sky', and it originally depicted a human figure. By clicking on the pronunciation (which is tian, pronounced in the high level tone), you could hear recordings of the pronunciation (in both male and female voices) (Wenlin includes recordings of all the Mandarin syllables). Below the explanation, two "triangle buttons" are visible. By clicking on the triangle labeled "stroke... (4 strokes)" you could see how to write the character stroke-by-stroke. (Wenlin can display over ten thousand different characters, using their conventional stroke orders.) Another triangle button gives you the option of viewing a list of all the Chinese characters which contain the 'heaven' character as a component. This kind of list can help you learn the differences between similar looking characters. Other interesting and useful features are available by scrolling down and clicking on more triangle buttons.

By clicking on the the button for listing all the words and phrases containing a character, you can see a list like this one for the 'day' character: The entire list has 490 items in it (in version 1.0 it had 67 -- how's that for an improvement?); only the first few are shown here. The list is ordered by frequency of usage, with the most common vocabulary at the top. Notice the words for 'today' and 'tomorrow'. An ordinary dictionary would not list these words under the character for 'day', because 'day' is not the first character in the word. (If you prefer, you can also list words and phrases starting with a character, in alphabetical order, like an ordinary dictionary.) But Wenlin lists mingtian 'tomorrow' under both the characters ming and tian. If you wanted to know more about the first character, ming, you could simply click on it (--if you were actually using Wenlin, instead of just looking at an illustration on the Web). Suppose you'd like to see some examples of how the word for 'tomorrow' is used. You could invoke Wenlin's Search Files feature to search through a huge collection of Chinese literature for examples.

Searching files for examples of usage

This is what you would see if you used Search Files to find examples of mingtian 'tomorrow' in a collection of stories and essays by the famous 20th-century author Lu Xun, if you suspended the search after four occurrences had been found. (You can suspend a search at any time, and then resume it at any time.) The window displays the name of each file, the position of the occurrence, and the line that contains the occurrence. To open one of the files and see the full context of an occurrence, you could click on the triangle button next to the file name.

Prices
Due to a substantial fall in the value of the pound in relation to the US dollar we regret that we have had to raise our prices, but we are keeping them as low as possible. The retail price that is recommended by the producers of Wenlin in the USA is $179 plus $20 for shipping to Europe.

Single-user price: £115. No shipping charge as the software is available by download.