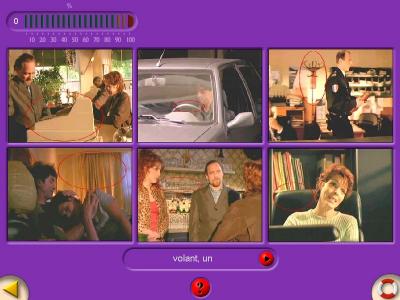 These DVD-ROMs run on computers equipped with a DVD-ROM drive and cannot be played on a domestic DVD player. The Movie Talk series is aimed at advanced language learners and is based on authentic movies of between 50 minutes and 112 minutes in length - the complete movie being stored on the DVD. The complete series consists of:

Each DVD is divided into six sections:

In addition, it is possible for the learner to select his/her support language, e.g. a Spanish MT speaker learning French could select Spanish as the support language. Individual learners' names are stored, with a record of their score, the date on which they last used the DVD, and the total number of sessions in which they have used it.

You pay a once-only charge for the LanguageLab network CD-ROM and then pay for each language CD-ROM according to the number of computers that will run the program at any one time. For example, if you have already paid £220.00 for a 20-100 user licence for a version of the program in one language, then each subsequent version that you buy in other languages will cost you £110.00 per language.

Postage and packing for EuroTalk products is free within the UK and priced at cost for delivery to other countries.